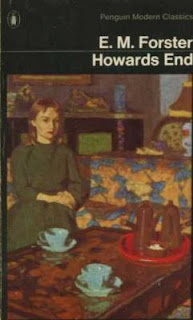 Howards End examines the cultural inheritance of England. Forster was writing at a time when England was changing; the development of urban conurbations, the motorcar and mass production are just a few changes that E.M. Forster observed as having impact upon the English landscape.

My favourite passage within the novel is the following and captures many of the novel's themes:

‘England was alive, throbbing through all her estuaries, crying for joy through the mouths of all her gulls, and the north wind, with contrary motion, blew stronger against her rising seas. What did it mean? For what end are her fair complexities, her changes of soil, her sinuous coast? Does she belong to those who have moulded her and made her feared by other lands, or to those who have added nothing to her power, but have somehow seen her, seen the whole Island at once, lying as a jewel in a silver sea, sailing as a ship of souls, with all the brave world’s fleet accompanying her towards eternity?’

‘Does she belong to those who have moulded her and made her feared by other lands,’ this line clearly portrays businessmen and politicians; the Wilcox’s. Henry Wilcox, is at the forefront of financial power, he seems wholly materialistic and encourages all forms of technology, change and modernity. Henry Wilcox is one who has ‘moulded her’ and this we witness through his disregard for rural traditions. He built a garage ‘to the west of the house, not far from the wych-elm, in what used to be the paddock for the pony.’ This indifference to the preservation of rural England is made more poignant a few chapters later when it transpires that Mrs Wilcox loved the paddock more than she loved the garden. This demonstrates a depressing, prophetic vision of England. One in which we see the paddock, turn into a garage with a motor-car and therefore the rural England with long-established traditions is destroyed by ‘the civilization of mechanical appliances.’

In stark contrast to the Wilcox vision of England as a powerful force for change, there is the vision of an England represented by the house ‘Howards End,’ and people who represent the creative imagination. The Schlegals are in opposition to the Wilcox’s. They have ‘added nothing to her power.’ They belong to the world of culture and sustain England’s intellectual life. The Schlegals have ‘seen the whole Island at one…sailing as a ship of souls,’ in other words they are able to make a connection at an individual level. We clearly see this through Margaret and Helen’s relationship. Through their values they embody and represent the novel's epigraph, ‘only connect.’

Whilst the Schlegals have not added to England’s power, they have enhanced the various visions of England. They have seen ‘the whole Island at once, lying as a jewel in a silver sea.’ The vision of a ‘Jewel in silver sea’ is wealthy imagery. This is the perception of the Schlegals towards England, it has been made wealthy by others and they shall enjoy the vision of its wealth. Margaret states that the Wilcox’s ‘keep England going.’ She acknowledges a connection between the Wilcox’s and the future of England.

The Wilcox’s realities of class, money and power conflict with the Schlegal’s representation of self-realisation through their relationships with each other. Margaret Schlegal in particular is a representative of the humanistic ideal. Helen also embodies this to a certain extent and the foremost example of their humanist tendencies appear in their relationship with the poor Leonard Bast.

Leonard is their project; the liberal Schlegals promote his cultural aspirations and try to connect with him through these. Despite their passion to enable him to come aboard their ‘ship of souls,’ he becomes a theoretical case, ‘Helen at one part of the table, Margaret at the other, would talk of Mr Bast and of no one else, and somewhere about the entrée their monologues collided… and became common property…After the paper came a debate, and in this debate Mr Bast also figured.’ The Schlegals lose their connection with him as a human individual, which is paradoxical as they truly care for people above all else, ‘It is sad to suppose that places may ever be more important than people.’ Margaret’s prophetical statement becomes increasingly poignant as the novel develops. Howards End becomes more important to Margaret than Leonard Bast or even her husband Henry Wilcox.

The Schlegals are half-German which introduces the theory that they do not seek possession and ownership of England as the Wilcox’s do. They are unattached, Helen uses Germany as a refuge when England and the Wilcox’s impose too much power over her. The Schlegals are visionary with regards to England, their discussion groups and interest in ‘causes’ illustrates this. They theorize and connect with each other in order to promote their liberalism and their liberal dream for England.

Howards End starts with a vision of England that centres on Mrs Wilcox. Helen’s letter to Margaret describes this, ‘trail, trail went her long dress over the sopping grass, and she came back with her hands full of the hay that was cut yesterday.’ And further on we hear the narrator state ‘she seemed to belong not to the young people and their motor, but to the house, and to the tree that overshadowed it. One knew that she worshipped the past.’ These images promote England’s rural past and Mrs Wilcox embodies a vision of England that is being eroded by the mechanical, powerful and modern ideals of her husband. Mrs Wilcox’s vision of England is connected to the earth and to her house, therefore her constant walking in the garden and smelling of the hay.

Henry Wilcox’s power conflicts with Mrs Wilcox’s vision of Howards End being left to Margaret. Howards End needs ‘accompanying … towards eternity’ if it is to survive. Referring back to the introduction, Mr Wilcox’s power is threatening its survival and Mrs Wilcox recognizes Margaret as one of the ‘brave world’s fleet’ who will protect the house. The conflict between power and vision leads to a form of unification at the end of the novel. Margaret creates a home for both Henry and Helen, and Mrs Wilcox’s vision is achieved.

Forster portrays a vision of national continuity within the passage, ‘with all the brave world’s fleet accompanying her towards eternity,’ which presents the ideals of harmony. It is a vision untainted by power. Vision and creativity will ‘continue towards eternity’ whilst characters like Margaret are able to mediate with those in power, as Helen points out to her sister ‘but who settled us down? … You!’ The novel ends in a similar way to its opening with Helen's idyllic description of Mrs Wilcox, it promotes a continuation of the pastoral ideal, ‘ “The field’s cut!” Helen cried excitedly – “The big meadow! We’ve seen to the very end, and it’ll be such a crop of hay as never!”’
Posted by Bloomsbury Bell at 21:40

"The chief requirement of the good life', said Michael, 'is that one should have some conception of one's capacities. One must know oneself sufficiently to know what is the next thing. One must study carefully how best to use such strength as one has.'" Iris Murdoch, The Bell

Bloomsbury Bell is a blog about all the things I love; literature with a smattering of other bits and pieces.

Bloomsbury Bell
I am another English graduate with a passion for literature, drinking tea, binding books, eating cake and writing.

Some of my favourite books